The Birth Pangs of Justice Reform – trials and tribulations

14 Jun The Birth Pangs of Justice Reform – trials and tribulations

Posted at 17:03h in Blog by Franco Debono 1 Comment 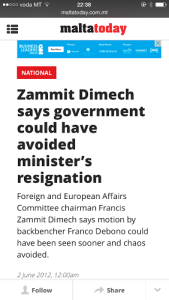 The birth pangs of  a Justice Reform . . . .so central to a modern democracy. These are our collective memories, uniting us as a nation. Great reforms and civil rights in any country are rarely the result of some Report but more often the outcome of battles and some strife – the will and tenacity to progress which overcome resistance by the status quo, which holds thew ultimate essence and significance of the reforms themselves. But ultimately unity reigns.

On the 8th November 2011 I had presented a private members’ motion about Major Reforms in Justice and Home Affairs (two years later taken on board by the Bonello Report), representing various calls I had been making over the previous four years, but after six months the motion had still not been brought up for discussion.

In the meantime an Opposition motion calling for Carm Mifsud Bonnici’s resignation over shortcomings which my motion was intended to address, was brought up for discussion before mine. Parliament approved the no confidence motion on Wednesday 30th May 2012, and my private members’ motion was brought up for discussion on Tuesday 12th June 2012, almost two weeks later.

”In an interview with Sunday newspaper Illum, Nationalist MP Francis Zammit Dimech says that Minister Carm Mifsud Bonnici’s resignation could have been avoided.

“I believe it would have been a completely different story had Franco Debono’s motion been put forward for discussion in Parliament prior to the motion submitted by the Opposition,” Zammit Dimech says.” – Maltatoday – 2nd June 2012.

In the meantime there was a Parliamentary vote of no confidence in RCC, in which I voted with the government, and in a strange twist of events, almost three weeks after the CMB vote, on Wednesday 20th June 2012, the PN executive banned three mps including myself from contesting the next election.

It seems the party had realised it was a mistake to bring for discussion the CMB no confidence vote before my Justice Reforms motion so much so that it seems no action would have been taken had the RCC motion not taken place. In fact the Executive Committee condemnation and ban was so tied to the RCC vote that one of the other mps Dr Pullicino Orlando declared with the Times, the next day that ”Hon. Debono was only roped in because it couldn’t possibly be avoided in the circumstances, Dr Pullicino Orlando said.” in a story entitled ‘ Debono to contest PN Executive condemnation’ – Times of  Malta, June21, 2012.

In the meantime the Telegraph reported in Britian ”Government MPs over the last five years voted against their party line in more than a third of Commons divisions (35 per cent). . . . . . There were a total of 110 occasions during 2010-2015 when seven or more Conservative MPs voted against the party line.  Of the top seven most rebellious MPs in the last parliament, all have been re-elected.” – The Telegraph 11 May 2015.