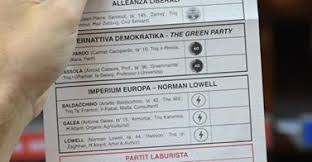 Posted at 17:39h in Blog by Franco Debono 0 Comments

And yet we are the only country across Europe to have just two parties in Parliament. Why? Because there’s only so much laws can do, they create a space within which people act in a free manner according to their whims and wishes and it is ultimately these whims and wishes which ultimately shape the fate of a nations. Laws are vessels but people charter the nation’s route.

This is not to say that there is no need for reforms in the electoral laws, some tweaking here and there but the point is that ultimately the situation in any country at any given time reflects not only on whoever is ruling or the rules but also the wishes and what the ruled are ready to accept. Reformed laws don’t necessarily mean changed attitudes.

We can reform the electoral laws as much as we like because if people wish to go on subscribing to the two party polarisation that has gripped this country for fifty years that is what they will do. After all MEP elections Malta is just one whole district, and yet the duopoly reigns supreme.

And if one is not happy there is just one thing you could do – there is a whole wide world out there . . .. .